The Circle of Fifths (and how to use it...) | EDMtips.com

The Circle of Fifths (and how to use it…)

It might sound like an ancient brotherhood of knights, but the "Circle of Fifths" is actually a really useful tool in music composition. If you want to quickly find which chords work together, or which notes to use, this little circular diagram can be your best friend...

So what is "The Circle of Fifths"?

The Circle of Fifths is a circular diagram that shows the sharps and flats (black notes) in each musical key, and how different keys work in relation to one another (for more info on musical scales and keys, check this post). The original concept was drawn-up by the Greek scholar and philosopher Pythagoras in the 6th century B.C, as a way of dissecting musical tuning for all to understand. Clever chap. It was further refined in the 1670s by the composer and theorist Nikolai Diletskii.

Why is it useful?

You can use it as a guide for quickly programming in melodies, harmonies, bass lines and chords into your DAW (Digital Audio Workstation) in specific keys. It can also be used to work out which keys and chord progressions work well with each other. If you want to skip the part about how the circle is constructed and jump straight to making chord sequences, click here. 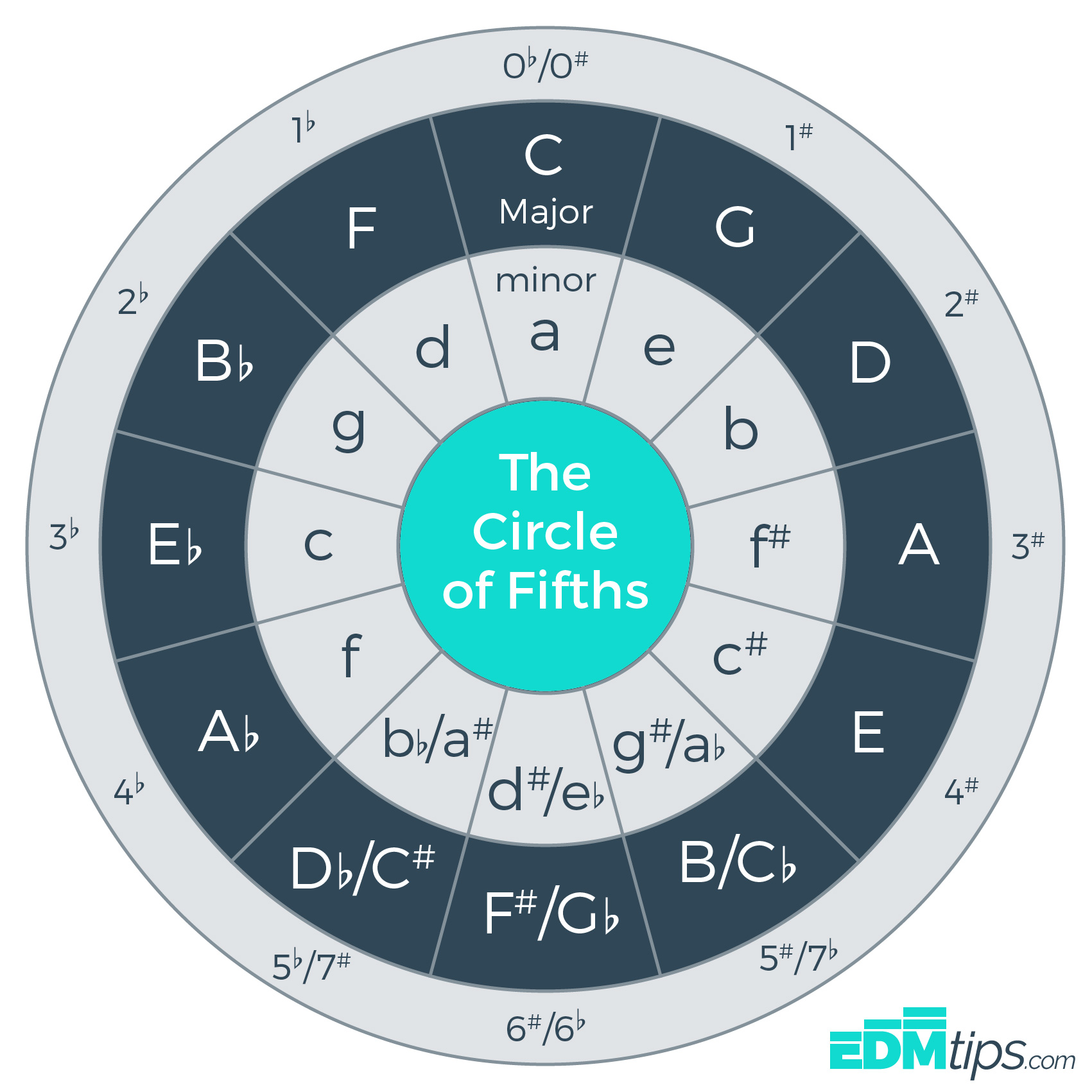 How to read it:

How to use it:

There are four ways to use the Circle of Fifths: One is for working out which sharps and flats are in a particular key (the key signature), and three are for composition. All are useful (I’ll explain why):

Working out which sharps and flats to use is essentially important for writing quickly and smoothly (check out this post for more detail). The Circle of Fifths provides a really quick, simple way of doing this...

The key of C (at the top) has no sharps or flats. Each key gains one sharp at each position travelling clockwise from the top (so “G" has one sharp, “D" has two sharps, “A" has three sharps, etc.), all the way to C# which has seven sharps.

Similarly, each key gains one flat at each position travelling counter-clockwise from the top (so “F" has one flat, “Bb" has two flats, “Eb" has three flats, etc.), all the way to Cb Major which has seven flats. This is why it's so quick and easy to work out how many black notes are in a particular key.

Once you’ve used the Circle of Fifths to determine which black notes are in the key you are working in, check out this post for tips on melody writing in your DAW.

Using The Circle of Fifths to write music:

Each method of composing music involves interpreting the letters of the circle differently:

1. Notes. Reading the letters as notes is useful as it makes working out chords quick and easy. e.g. To work out which notes are actually in a chord, you can use this simple formula: For a major chord, select your root note (e.g. “C”) from the outer circle, then choose the two notes (both inner and outer circle) that are one place clockwise from the root. Se the chord of C Major would be C + E + G. For more complex chords we simply use the same formula, so Ab Major would be Ab + C + Eb. For minor chords, select your root note from the inner circle (e.g. “E flat”), then play the corresponding note from the outer circle, and the inner circle note from one place clockwise. E.g. the chord of "E flat minor" comprises Eb + F# + Bb. 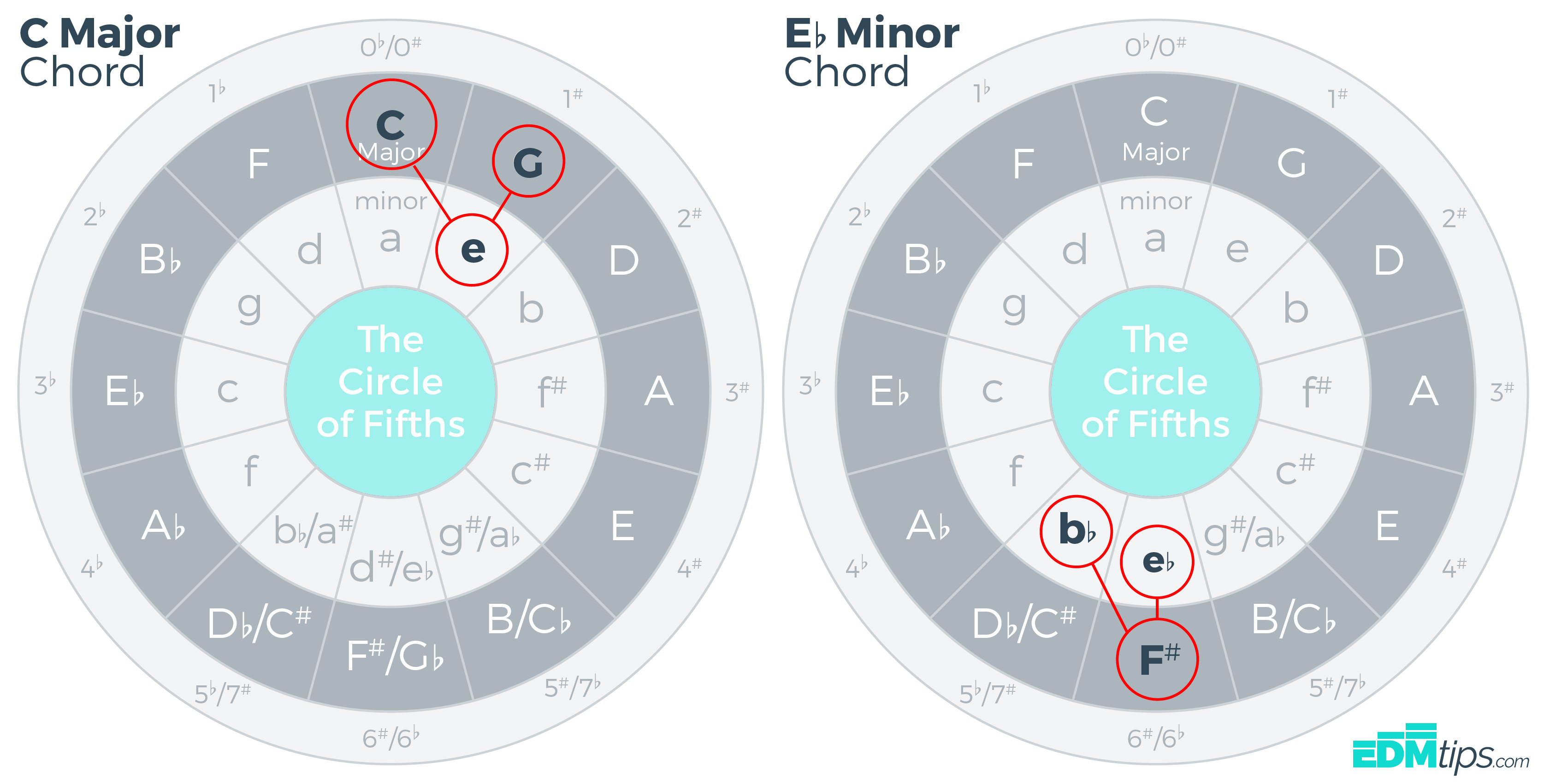 2. Chords. Reading the letters as chords is useful for coming up with strong chord progressions. The chord that is one place clockwise from the root chord is the dominant (or “Fifth”) chord. This provides tension before returning to a root chord (e.g. G Major is the fifth chord of a C Major root chord). Circle of Fifths chord progressions are considered to be harmonically very strong, in the sense that they pull our ear toward one chord being the tonic, or key chord. In that sense, they’re very satisfying. Circle of Fifths progressions are often used in choruses because they’re so strong and unambiguous. Try chords near the root chord for smooth progressions (e.g. C Major, A Minor, F Major, G Major).

3. Keys. Reading the letters as keys is good if you are changing key within a song. This isn’t very common for electronic dance music, but certainly can be used. Keys near to each other on the circle will generally transition well, whilst the keys farthest away from each other have little in common, and a musical journey from one side of the Circle directly to the opposite side can sound quite jarring. For instance, you might move from C Major to A Minor (or vice versa), and as they are relative keys that shift will work well (play example). However, a shift from C Major to G# minor probably won’t sound so good as they share very few notes.

So there you have it - The Circle of Fifths and how to use it! If anything is unclear, or you’d like me to make a video about it, let me know in the comments section 🙂

Cheers, and happy producing!
Will