How To Use Keys To Make EDM - Learn Here | EDMtips

Imagine you could take any melody in your head, quickly translate it into your D.A.W (Digital Audio Workstation), then work out which chords, harmonies and bass notes will work with it and sound great. Having a basic knowledge of keys and scales (and how to use them) will allow you do to this.

If you know in which key you’re producing a song, you can use the notes you KNOW will sound good - without having to hit-and-miss it in the piano roll editor.

In this post I'll show you the different musical keys, and how you can use them quickly and easily in your DAW to make better music (click here to skip straight to the keys and their scales). Feel free to bookmark this page for reference, or download the concise PDF version using the form below:

Well, in music, a key is basically the name given to a collection of notes that can be used together and still sound good. You get major keys and minor keys. To summarise in a simplified way, major keys sound happy :), and minor keys sound sad 🙁 (although it can depend on the context). If you stick to the notes within a particular key (or a scale of notes based on that key), your music will more than likely sound pretty good!

The name of a key (e.g. C Major, G Minor, B Major, etc.) is taken from the first (lowest) note in the key (also known as the “root” note or “tonic”), and the "major" or "minor" part of the name is determined by the intervals between each note. "But what's an interval?" I hear you ask. We'll cover that after scales...

So what's a scale?

A scale is simply an array of musical notes based in a particular key, and ordered by pitch (either ascending or descending). So, the ascending scale of C Major would be C, D, E, F, G, A, B.

The smallest space - or "interval" - between each musical note is called a “half-step”, and keys are groups of notes separated by specific “intervals”. You can work out the notes of any key by simply counting the intervals up from the root note. All major keys use the same configuration of intervals, as do minor keys (see below): 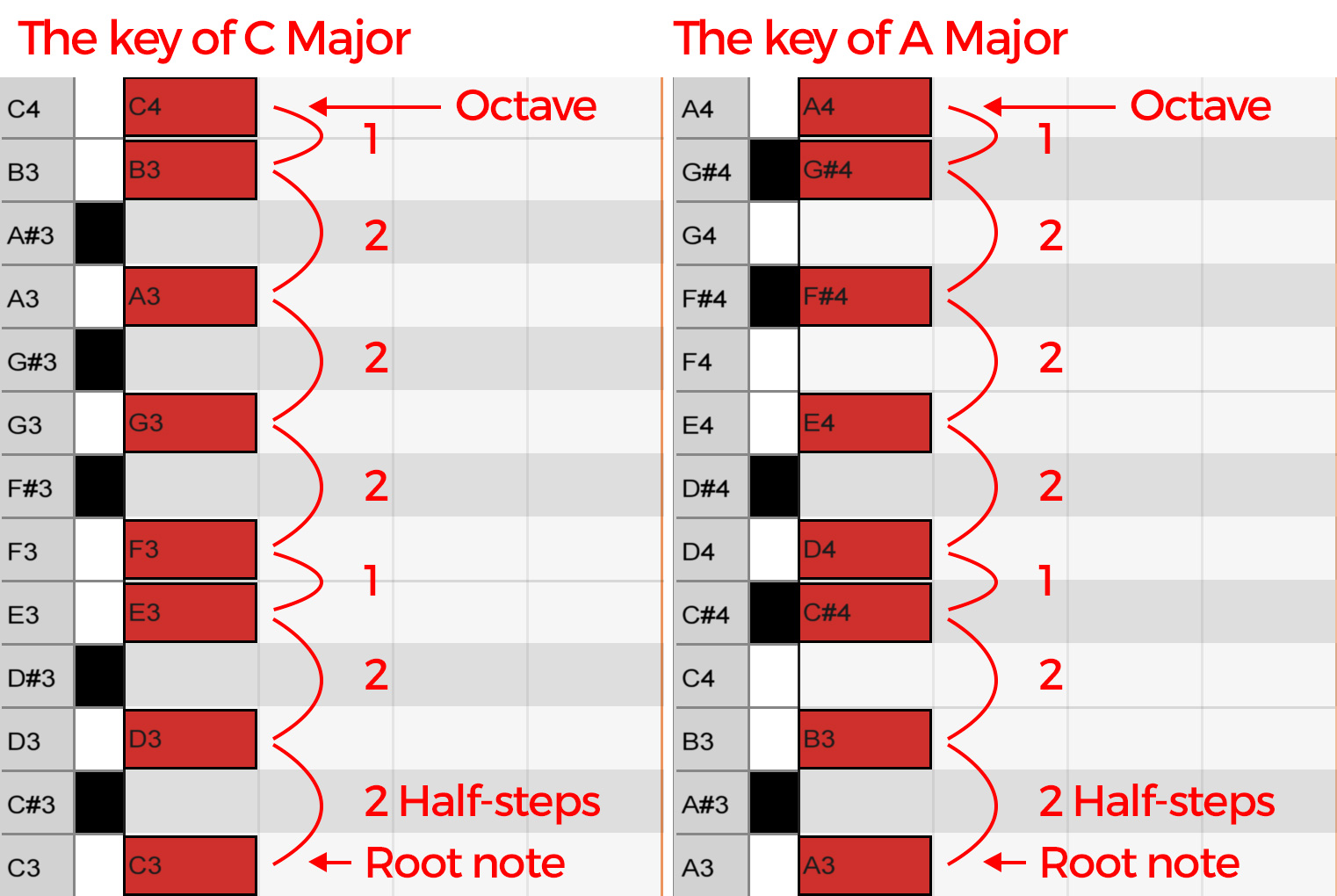 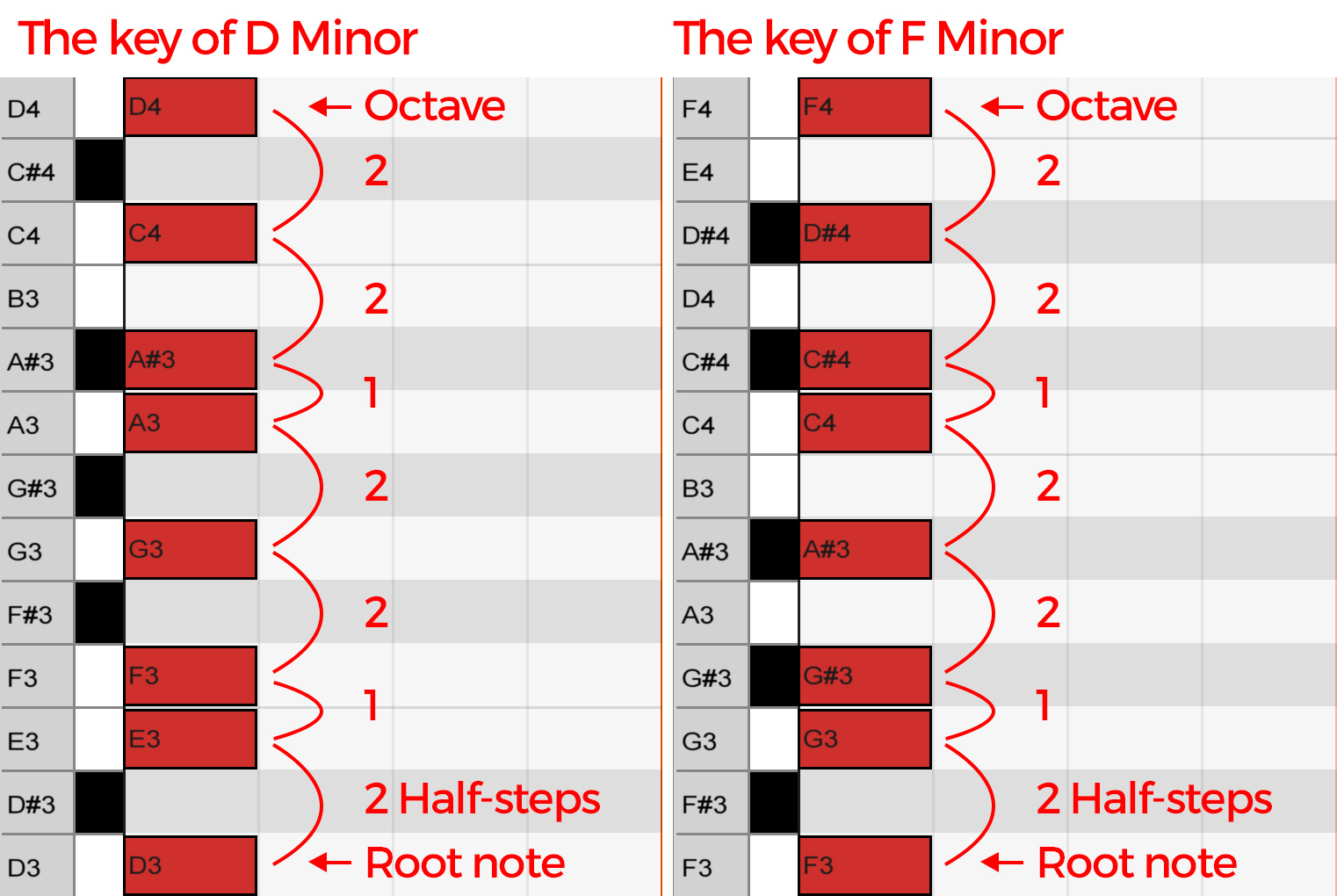 So you can see from the examples above, working out the notes in any key is easy. Just count the intervals using the configurations above!

In your DAW’s piano roll editor (and on a piano) you’ll see there are white notes and black notes, which are referred to as either “flats” or “sharps” (depending on what key you’re in). You don’t need to worry about that too much… Just remember that when you see a sharp symbol (“#”), it means to play one half-step ABOVE the written note, and a flat symbol (“♭”), one half-step BELOW (e.g. if you see a C# written, it means play the black note directly above C, and if you see an E♭ written it means play the black note directly below E).

Here is a diagram to show you what I mean: 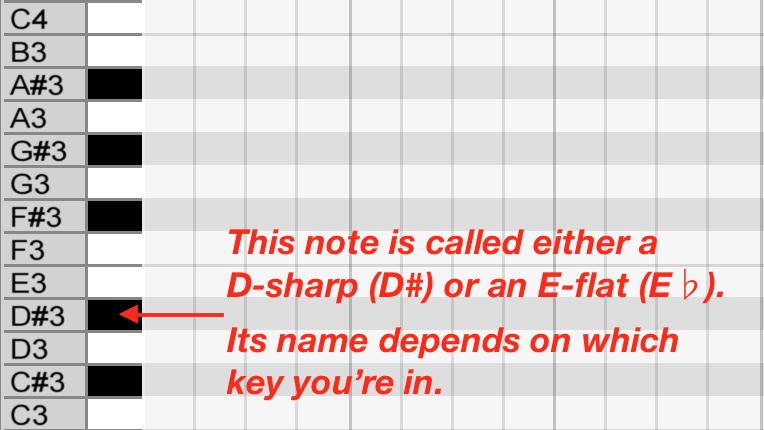 *N.B. Your DAW will only display the black notes with a ”#” symbol, and never with a ”♭” symbol, because a) your DAW doesn’t know which key you’re writing in and b) the “#” symbol is native to software, whereas “♭” is not.

How to quickly write music in key using your DAW:

We will go through each of the keys you’re most likely to use for writing EDM, but first I want to take you through how to use them.

Say we want to write a track in E Minor (although you can choose any key). The key of E Minor uses the notes E, F#, G, A, B, C, and D, which will look something like this in your piano roll editor: 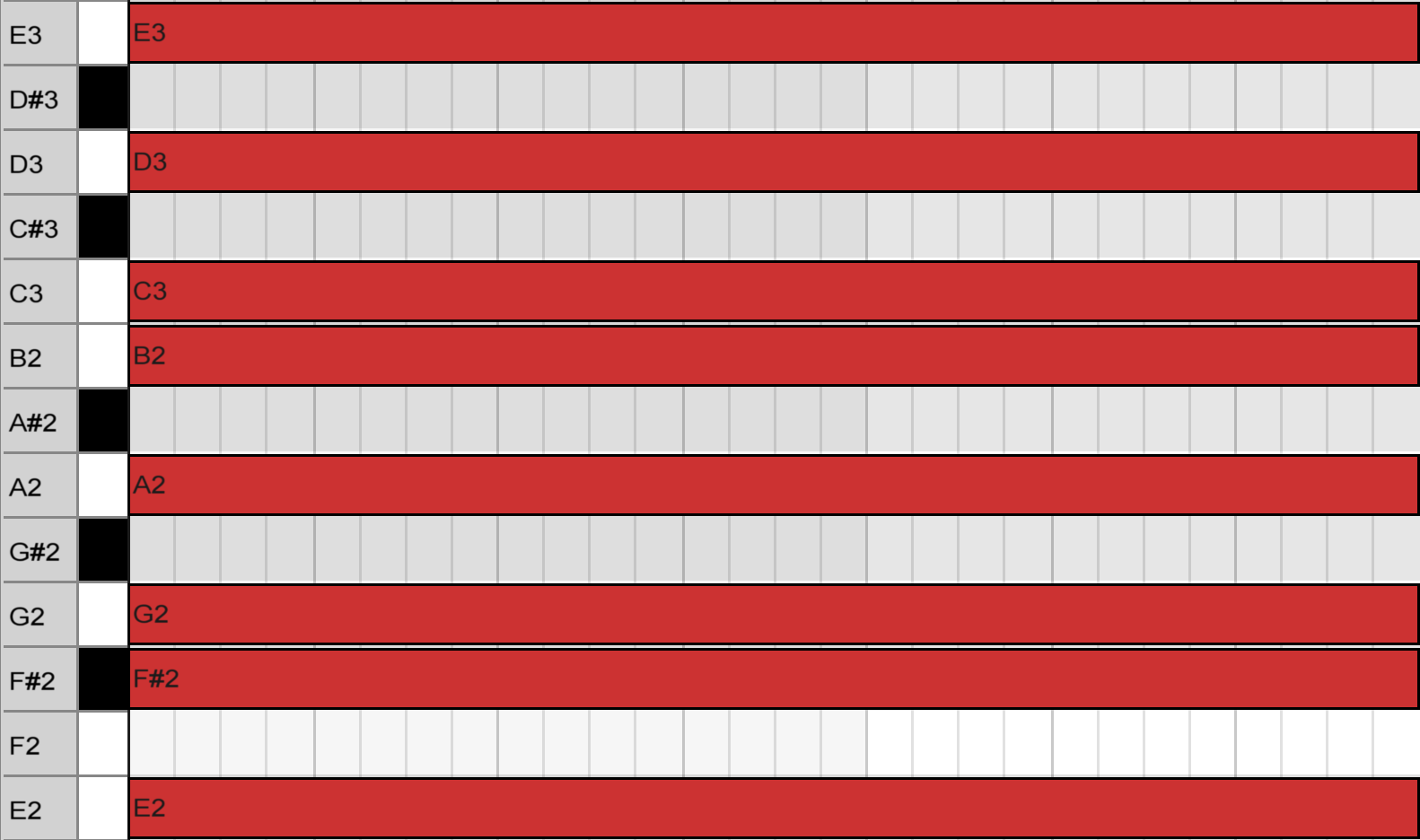 Above: The notes from the key of E Minor

Let’s begin by writing a bass line using only those notes - starting on an “E” (the root note of the key) - and it will almost certainly sound “right”. Try different combinations to see for yourself. Here is what I came up with:

Just because a song is in a particular key, however, it doesn’t mean that all the notes in the song have to belong to that key. For example, now we have our bass line (using only notes from E Minor), we want to add some chords. The root (lowest) note of each chord will follow the bass line we’ve just written, and we'll add the third and fifth notes to make them into chords (see this post for chord theory):

Above: C sharp isn't in the key of E Minor

That’s normal - and it’s ok - as we can easily work out which notes to use in each chord. What is important is that the root of each chord is in the key of E Minor. For more info on building chords, check out this post I wrote a couple of weeks ago.

So, as we can see, knowing our key helps us build - quite literally - the base/bass of our song. We can then work out the chords we want, and add a melody which - like the bass line - will use only notes from within the key of E Minor:

And there you have it... an idea for a track in E Minor! This should help you quickly and simply build your EDM tracks in key. It doesn’t matter which genre you choose - it will work just as well for drum ’n’ bass as it will trance, house, trap or dubstep.

Now we know how to use keys, let’s look at (and listen to) the few you’re most likely to use when making EDM, the notes they contain, how they look in your DAW, and how they sound when played in a scale (i.e. in successive order):

There are many other key and scales, too (and we’ll look at those another time), but these are the most important. So… have a play, experiment with writing in different keys and let me know how you get on! If anything is unclear, let me know in the comments and I’ll do my best to clarify. Cheers, and happy producing 🙂

Download the free Using Keys in EDM Cheat Sheet using the form below:

How to Make House Music like Oliver Heldens - Step by Step!